a new year is nigh 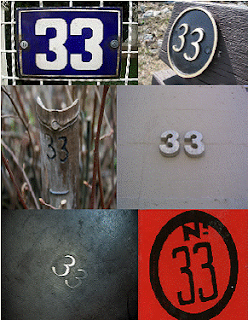 in not so many weeks I will be turning 33. i find myself inexplicably drawn to this number, and look forward to adopting it as my own for a year. that being said, i will be posting a few prepatory items in anticipation of its arrival. to begin, here is a sprinkling of tiny information nibblets concerning the number 33:

Newer Post Older Post Home
Subscribe to: Post Comments (Atom)
"Themost difficult thing is the decision to act, the rest is merely tenacity. The fears are paper tigers. You can do anything you decide to do. You can act to change and control your life; and the procedure,the process is its own reward."

search and you shall find

i try my best to give photographer credits, and in some cases links, for the images i post here, but this is no easy task. if you know the name of the photographer or copyright holder for an uncredited image, feel free to email me the info and i will be more than happy to post it.
all of my own work (photos, drawings, paintings etc.) represented here and elsewhere, is protected by copyright.
that being said, please feel free to use any of it on your site, as long as it is properly credited.
cheers!